AutoTips Inside the engine page

Thanks to JASPER ENGINES & TRANSMISSIONS for the image of the internal view of an internal combustion engine. Many of the components shown that experience wear or stress will be replaced in a remanufacured engine. A true professional hi-tech remanufacturing company (such as Jasper), typically will produce an engine with components and tolerances equal to or better than a new engine.   The description is for a typical engine, there are many variations in design.

Parts in an engine, please refer to image below.

1. Head. The passages shown carry engine coolant. (water / antifreeze mixture). Sometimes, the gasket between the head and the lower block of the engine will develop a leak, and need to be replaced. You may have heard of a "bad or blown head gasket".

3. Valves: The engine shown has only 2 valves per cylinder, some engine designs have more. An intake valve opens and allows a fuel / air mixture go be pulled into the combustion chamber below. As the engine rotates, it closes, the piston (4) comes up, compressing the mixture. A spark plug (normally at position 9 ), ignites the mixture and the burning gas / air expands and pushes the piston down -- which turns the crankshaft (7). After the mixture burns, the piston again goes to the top of the cylinder, and an exhaust valve opens. Hot exhaust gas is vented out the exhaust manifold, to the exhaust pipe, catalytic converter, muffler, and tail pipe. The crankshaft connects to the transmission via the flexplate or flywheel.

4. Pistons move up and down in the cylinders. The first piston is shown about at the top of the stroke.  The top position is sometimes referred to as Top Dead Center.  You may have heard of an ignition timing specification such as 7 degrees BTDC. That refers to a crank rotation that is 7 degrees Before Top Dead Center. The timing specification is a number mesaured in degrees that refers to the time the spark plug fires relative to the top of the piston position. (In the example when the crankshaft rotates 7 more degrees, the piston will be at the top. ) The spark plug fires before the piston reaches the top to allow time for the fuel / air mixture to start burning. The circles around the tops of the pistons are piston rings. They provide the function of sealing the fuel and air in the area above the piston, and keeping oil below the piston.

5. Timing chain / timing sprocket. The timing chain runs off of the crankshaft, and is aligned with the crankshaft to rotate the camshaft (6) to open and close the valves at the appropriate time.  Many newer cars use a timing belt (often used on overhead cam engines). Timing belts are normally made of a rubber compound, and require periodic replacement.

6.  The irregular shapes on the shaft are the cam lobes.

8. Valve springs push the valves closed, until a push rod or cam pushes them open.

9. Spark plugs go here, and the tip extends inside the engine combustion chamber. A high voltage spark ( 30,000 volts or more ) delivered to the spark plug by the ignition system ignites the fuel / air mixture.

10. The push rod shown from the top side. On the opposite end of the rocker arm on top of the push rod is the valve stem.

11. The oil pickup has a screen and is located in the bottom of the oil pan. If you don't keep your oil changed often enough, this can become covered with sludge formed from the oil and contaminants ( sludged ) or restricted, and all the other parts of the engine that require lubrication by the oil may not receive an adequate supply of oil. 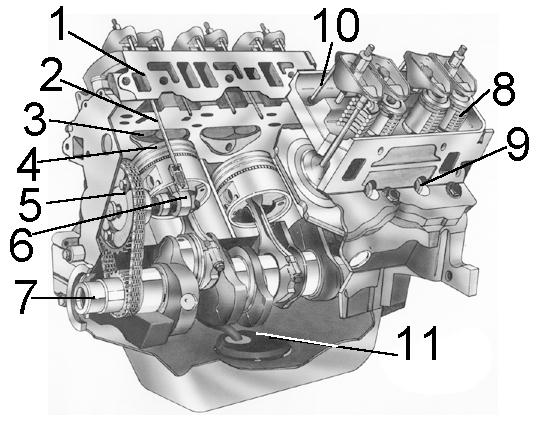